Do you need a good Android keyboard? 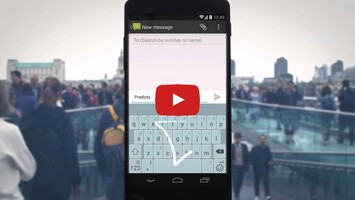 Advertisement
SwiftKey is a simple keyboard app that allows you to write much more quickly using your Android device after you've installed it. It intelligently corrects any mistake that you make... which is something that is quite common with touchscreen keyboards these days.

SwiftKey learns the words and phrases that you use the most in order to try to anticipate what you are going to type. So, usually, when you start to type a word, a series of suggestions will appear in the upper part of the keyboard, and you just have to tap on one of them for it to appear in the text field.

The SwiftKey configuration options allow you to change the appearance of the keyboard, selecting from among more than ten different options. Even more importantly, you can synchronize your Facebook and Twitter accounts so it can more easily learn the names you use and how you write them, adapting itself to your style and offering you better suggestions.

SwiftKey is a very useful tool that allows its users to write much more quickly from a touchscreen keyboard on any Android device. It is undoubtedly one of the best keyboards that you can install on your mobile phone or tablet.
Reviewed by Andrés López Translated by Erin Teske
SwiftKey adds keypress sounds

We're still in the throes of the battle for domination of the world of Android keyboards and each new update from one of the aspirants to the throne raises the stakes of the struggle. This time it's SwiftKey who's rolled out an update implementing quite an interesting customization element: the sound of keyboard taps.
See more

With support for more than 150 languages, SwiftKey's just showing off now

One of the most-used keyboards in the Android miniverse is undoubtedly SwiftKey. This essential tool for smartphones has been around on Android for long time, but it was only recently that it made all its themes free. A move they can be proud of. As they can be as well with their most recent update: app support for more than 150 languages.
See more

bad update from Uptown. got damaged version with only English. had to reinstall from Google.

The best of all keyboards.